Said No Teacher Ever

So, this video came across my news feed and it was too good not to share:

"Just keep your head on your desk, you need the rest."
"My dog ate my lesson plans."
"You know what, don't worry about handing it in, it's just busy work."

And my favorite: "Yeah, sure, Wikipedia is an acceptable source."

Happy Friday all!
Posted by Hannah at 10:00 AM No comments:

Email ThisBlogThis!Share to TwitterShare to FacebookShare to Pinterest
Labels: Teaching

I mentioned yesterday that my primary USB that I use for all of my school stuff bit the dust over the weekend.

So, since he wasn't on shift today, I asked Dan to call around to the techie places and see (1) if it was possible to pull the files off of the device and (2) how much it would cost. And in between classes, I got this: 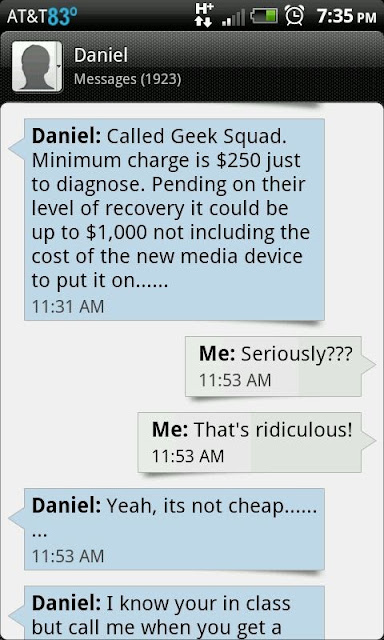 I figured it was going to cost us to get that stuff off of the pen drive, but I never fathomed it'd cost that much!

At that point I pretty much resolved myself to the fact that all of the information that I had accumulated over the past 3 years was gone. I had made peace with it.

Then, I get the next text from Dan telling me to call him after the next class was over. When I was able to call, he told me that I would owe him big time....

He had figured out Sunday night that a small metal piece was broken/loose on the chip inside the device. I had asked him not to fiddle with it for fear of him making it worse. Well, since he assumed we weren't going to be paying Geek Squad to fix it and they were our last resort, that fiddling wouldn't hurt it. He got out his soldering gun and tinkered away.

And he got it to work!

Well, he got it to work long enough to get the information off of it. Which honestly was all I cared about. I can get another USB drive. But the information was what I was most excited about. No longer was everything lost. I breathed the biggest sigh of relief.

Lesson learned. Never, ever, EVER go too long without backing up the information on a USB or even on your computer. I hope I never put myself into this situation again!
Posted by Hannah at 8:12 PM 1 comment:

Yesterday I lost everything. Everything I've accumulated as a teacher over the last three years.

My USB drive decided over the weekend that it was going to stop working.

And silly me, I can't remember the last time I backed up the information on it.

Luckily, there are files that I uploaded to the website my AP class uses, so I'm not totally starting over from scratch with that class. And, some of my colleagues had saved files that I had given them over the past 3 years for the standard class, so I was able to get those files from them today.

As if I didn't already have enough on my plate to juggle....

This sucks. There is no other way to put it. It simply sucks.

P.S. Yes, I know about Dropbox and other software similar to it. I just never bothered with them. And, yes, I'm kicking myself in the rear for that decision.

Posted by Hannah at 6:36 PM No comments:

Email ThisBlogThis!Share to TwitterShare to FacebookShare to Pinterest
Labels: Teaching 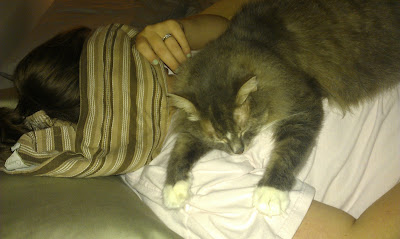 I guess while I was sleeping a couple weeks ago, the Hubby decided to snap this photo. Only, I wasn't just sleeping. I was nursing a migraine. They don't come as frequently as they used to. But when they do, the only thing I can really do is crank up the a/c, lay face down with an ice pack on my forehead and neck, and go to sleep.

On this occasion, I took Periwinkle with me when I laid down. That's why I wasn't lying face down. Typically, she'll only stay on my chest for a couple minutes before jumping down and finding a more comfortable spot. But this time, I guess, she decided to get comfy.

It has always amazed me how pets know when you're hurting and know when to stay close by.
Posted by Hannah at 10:30 AM 2 comments:

Wow... has it really been nearly three weeks since I last posted anything on this little blog of mine? Where has time gone? Wait, I know what's going on - school started back up again. Yep, we've been in school for a little over two weeks now, and it seems like things haven't slowed down since the first bell rang.

So here's a quick recap of what's been going on lately in my world....

First, I'm another year older. Officially a quarter-century old. We went out for lunch like we had been planning. Then Dan had little surprises all week to celebrate my birthday - foot massage, washed my car, a little clothes shopping. The boy even baked a cake!

We signed our lives away to our apartment complex for another year. Although I'm ready to move out and get a place of our own, it's just not the right time. We're hoping one more year will be enough time to get our things in order so that we can start looking for our first home.

Like I mentioned, school started back up. So it's been a bit of a whirlwind lately. I'm still waiting for things to settle down. I think the fact that I had to go to a week-long conference the second week of school still has me a little discombobulated. That, and the fact that it seems as though things are continuously being piled onto my already overflowing plate. #lifeofateacher 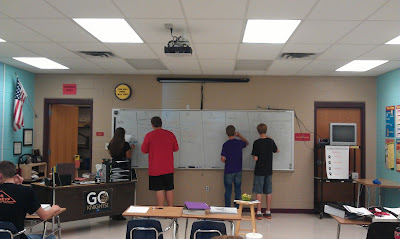 The week-long conference was about our state's end-of-course exam in US History. I attended a similar conference two years ago in Jacksonville (you can read more about that here and here). I was (again) the youngest teacher there. And for some reason, the people from the Department of Education were surprised (again....) that I was able to hold my own with the teachers who had many more years of experience than I do. Hey, I do what I can. But, in all seriousness, I did love the opportunity to meet with other Social Studies teachers and get an behind-the-scenes look at what goes into the standardized test making process. 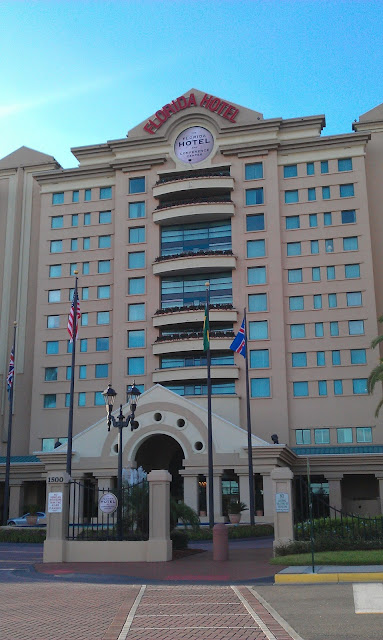 Dan has officially moved to day shift. It's been nice having him home at night, even though we're still eating separate dinners now. But the poor guy is bored on his days off. I think he's waiting for the weather to cool down a little more and the stormy season to pass before he gets back into riding his bike. In the meantime, I told him there's a teacher that I know that would love to have some extra help with filing and grading in the classroom....

We're buying a new couch and loveseat. Well, new to us anyways. See, when I got back from my conference I realized that one of the cats decided that our green loveseat was the perfect place to relieve themselves. I don't know if you've ever tried to remove the smell of cat urine from anything before - but it is near impossible. And since we've never been fans of that couch anyways, it didn't bother us to get rid of it. So, I decided to do a little hunting around on Craigslist. Normally, Dan and I have a hard time agreeing on furniture. I go for style, he goes for comfort. There has only ever been one couch that we've agreed we could both live with, and it just so happens to be this set from Ikea. And there just so happens to be a couple about 2 hours away from us who are selling their set. We're still crossing our fingers that we'll be able to fit them in our tiny living room. But I'm determined to make them work! It'll be so nice to have an actual couch instead of two loveseats.

Other than that, things haven't changed a whole lot around here. We're still chunking away money at our debt snowball little by little. We were really hoping to have everything paid off before Christmas, but it's looking like January will be our last month of payments. Hey, we'll take it - it'll be a great way to start off the new year!

This is where I promise to be better about checking in and writing posts, but if you've been around here long enough, you know that once the school year starts, promises don't stand a chance. So until next time...

Posted by Hannah at 6:39 PM No comments:

It's pretty quiet around the apartment today. Both cats are napping. The Hubby is catching up on sleep. I'm sitting at the computer playing around on Pinterest and making a list of everything I need to do before the first official day of school Tuesday. We've already done our weekend shopping, so now it's time to relax. 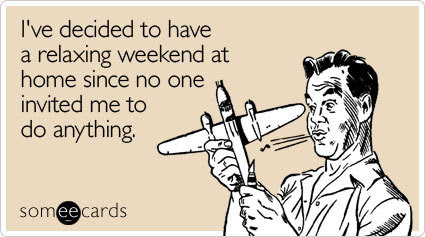 This image reminds me of one of those passive aggressive status updates on Facebook. In reality, we were invited to go out and do things this weekend. My mom invited us to go swimming at the springs with our niece and nephew. My aunt and uncle are in town and my parents are barbecuing. Mom wanted to know what we were doing to celebrate my birthday tomorrow. But it's been hard with Dan's new schedule to know what we can and can't agree to doing. It has been easier to just say "thanks, but we can't" then to have to apologize later for bailing on them.

Even the plans we do make are up in the air. Tomorrow, for instance, we're hoping to go to church and then have a late lunch/early dinner out to celebrate my birthday. But, if Dan gets home late, church won't happen. And, if he has too many calls tonight, then he'll be super tired and won't want to go out to eat. That's one of the reasons I didn't bother to invite my folks to eat out with us - we can't guarantee that we'll be going.

Luckily, Dan's got every other weekend off, so next weekend is already planned and chock full of family time. But for now, it's a lazy weekend around our place.

What are you up to this weekend? Any fun plans that I can live vicariously through? Would love to hear them!

Posted by Hannah at 2:50 PM No comments: