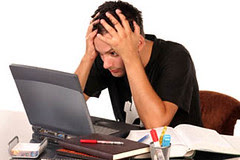 Photo Courtesy
So, I'm suppose to be finalizing grades in my grade book for report cards...but I am so not motivated. The more things that pile onto my proverbial plate, the more stressed I become, and the harder it becomes to feel motivated. I don't understand that equation, but nonetheless, that is my life. Not only are grades due tomorrow (not to mention, I have about 30 AP students waiting on an e-mail to tell them that they can go check grade book for the millionth time this weekend to see their final grade), but I also have to create a 100 question test for tomorrow, and a PowerPoint to introduce the Vietnam War. But instead, I sit here typing this post because I'd rather be doing anything but those other things.
This is one of the reasons why I put off creating a blog for so long: I never have time to really do anything other than school work. And right now, if I do happen to have a spare moment of time, I'm typically doing wedding stuff or relaxing with my fiance and taking my mind off of the craziness of my life. There are so many things that I need to post about: Part Two of my battle with fleas (spoiler alert: it didn't go as planned...), creating our save-the-dates on the cheap, the search for my wedding dress, my adventures in couponing, the pressures of being an AP teacher, the pressures of being an AP student, and my thoughts on the recent teacher merit-pay bill that passed. All in due time I guess.
I'm going to try and commit to a minimum of one blog post a week. Right now I think that is all I can manage with everything else going on. I'm hoping that come summer, I'll be able to post more frequently since I'll be out of school and looking for things to keep my mind occupied while everyone else works during the week. :)
Until next time....
Posted by Hannah at 6:26 PM No comments:

Lately I've been experiencing a bit of a problem at my apartment....

Email ThisBlogThis!Share to TwitterShare to FacebookShare to Pinterest
Labels: Pets

This is so exciting! For the last year or so I've been playing around with the idea of starting my own blog. Why? Well, mainly I wanted an outlet for all the things that pop into my head throughout the day. But I was afraid of putting myself "out there" for all the world to read about. Finally I decided to bring up the idea to my fiance (who is amazing by the way!) and his response was, "I wondered when you were going to think about starting one." So, with him on board, I decided it was time to join the world of blogging.
One of the first things I had to figure out though was what I wanted to blog about. There are so many amazing blogs out there covering such a vast amount of topics. Should I blog about getting married and being newlyweds? Should I blog about my profession (by the way, I'm a high school teacher)? Should I blog about my adventures in decorating? Should I blog about my cats? I was afraid that if I chose one particular topic I'd get bored with it in a few months. So, I figured, why not blog about all of them? This way I'm not limited on what I need to blog about, and rather focus on what I want to blog about. So it was settled! A blog about the mundane & crazy things that happen in my life. :)
So this is it - a blog about planning a wedding, living on a tight budget, raising two cats, living on my own for the first time, dealing with a long distance engagement, being a first-year teacher, and anything else that inspires me to write. I can't promise that it'll be interesting, but I can promise that it will be real and 100% honest.
Posted by Hannah at 6:06 PM No comments: