Hello everyone. Long time, no posting. This semester is seriously kicking my butt. I'm at school an hour earlier than I need to be, everyday, and I'm usually staying two hours after the final bell rings catching up on grading or helping students study for their next test. Progress reports have already been handed out, which means we only have a few more weeks until Spring Break!

Anyways, I'm getting way off topic, aren't I? What does school have to do with manatees? Absolutely nothing. Time to get back on track.... shall we?

I mentioned that one of our new year's resolutions this year was to go swimming with the manatees. It wasn't a hard resolution to accomplish considering my mother-in-law gifted Dan with vouchers for his birthday back in November. We finally got around to booking a trip last month.

Early one Saturday we headed out to Crystal River, which was a little over an hour drive. We got to the dive shop a little early. Considering I had never been inside a dive shop before, this place was pretty cool. Equipment... souvenirs... anything you could need to go snorkeling or diving, they had it. They even had an indoor dive pool for their scuba diving certification course. Let me tell you, Dan was like a kid in a candy store! 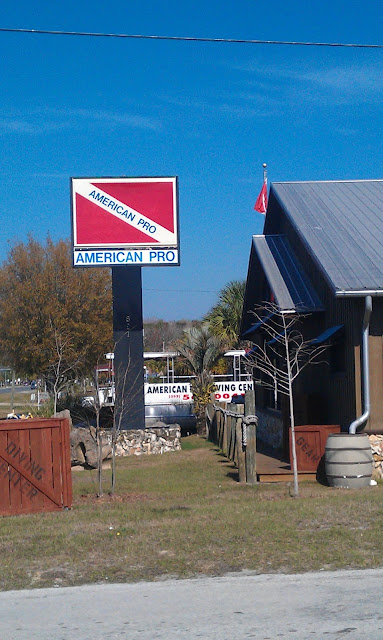 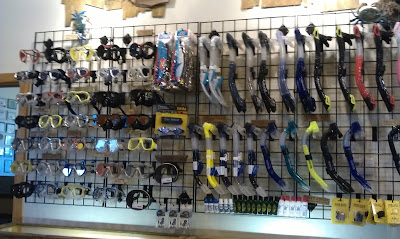 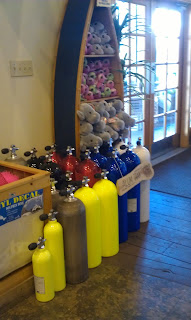 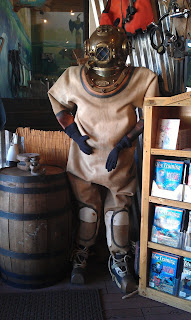 We checked in, signed waivers, and got our wet suits, fins, and snorkels. 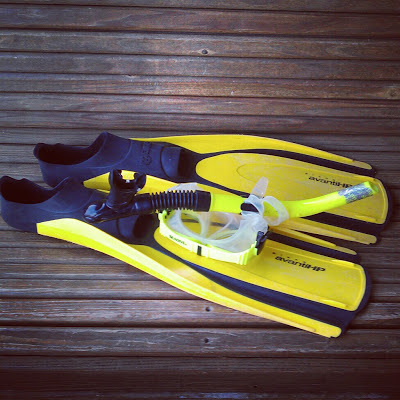 Now, I've never worn a wet suit before. The only thing I had to reference were all of those TV shows and movies where the character has the hardest time getting into one. In reality, it wasn't that bad. The only thing I really struggled with was zipping it up. Now, wet suits aren't flattering on anyone (especially at the butt crack of dawn), but we both sucked it in up and took pictures while we waited for the rest of our group to show up. 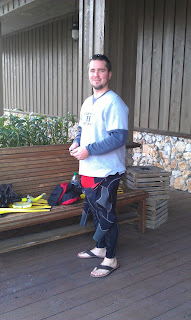 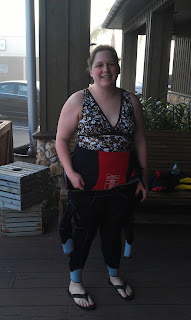 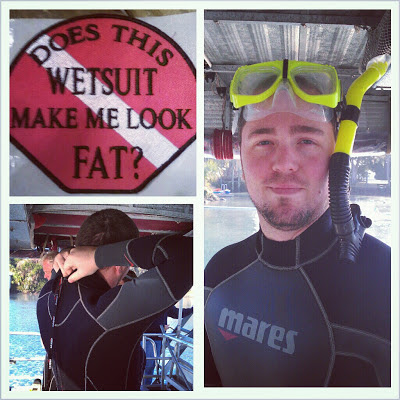 We saw that patch at the shop after our tour was over, and I simply couldn't resist posting this on Instagram!

Our tour guide was named Deanna. She was awesome! Really personable and answered all the questions our group had. Although, there weren't a whole lot of questions considering there were only 6 of us on the tour. Yep, 3 couples. Wanna guess which couple was the youngest? It's okay, we're pretty use to it where we live.

Anyways, we took a quick trip down Crystal River to get to the spot. 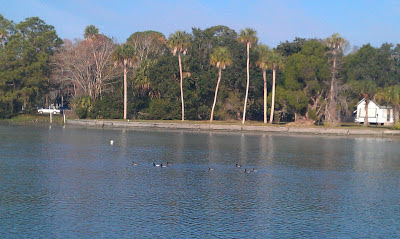 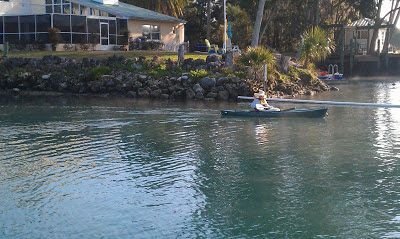 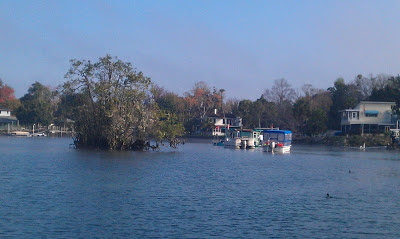 When we first got there, there wasn't a whole lot of people in the swimming hole. It was kinda nice being able to swim around without plowing into anyone. Because later on, another tour group of about 30 people showed up... yeah, things got a little crowded. But we still had a pretty good time. 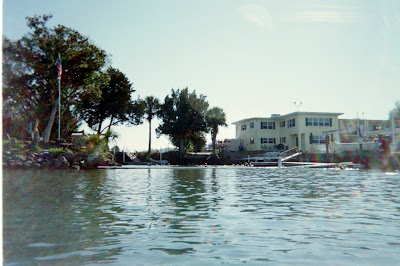 We purchased one of those underwater cameras to take on the tour. The pictures didn't turn out all that great. People kicking around dirt in a shallow swimming area. Manatees eating plants on the bottom of the swimming hole. Basically, it was really cloudy once you got in the swimming hole. It was so bad, that you'd be floating on top, and all of a sudden a manatee would appear below you from out of no where trying to surface for air. 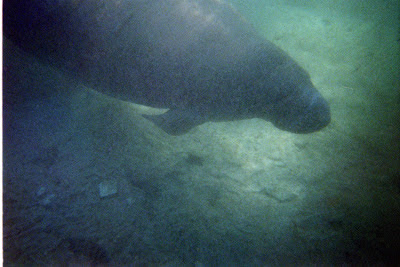 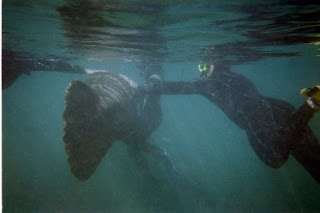 So, interesting fact we learned on our tour: Citrus County is only county in Florida that allows you to touch the manatee. Manatee are protected by more laws than there are fingers on my hand (we had to watch a video before we went on the tour). If you come across them while boating or fishing, you're suppose to leave them alone. But, considering most of Citrus County is manatee habitat, they have been granted special permission to host tours into the rivers for people to get up close and personal.

Oh, and another interesting fact: Manatees are slimy, but rough and bumpy at the same time. Most will have scars on their backs. They'll also have algae growing on their backs because they are such slow moving creatures. 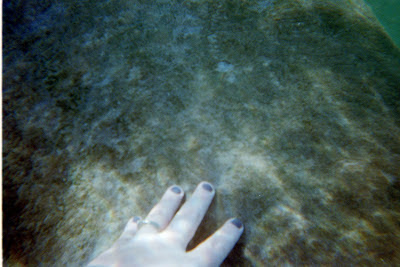 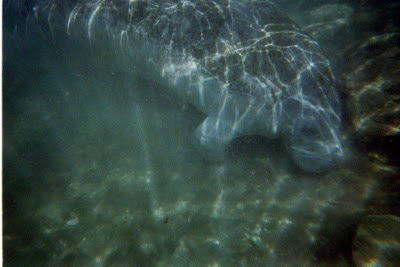 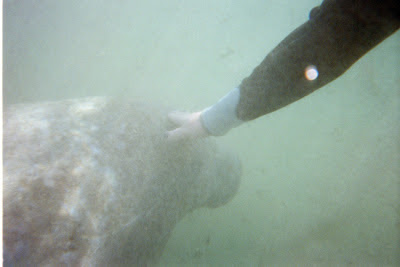 All in all we had a great time. The hot cocoa that was served back on board our little boat was the cherry on top (remember, we did this tour in the middle of January!). 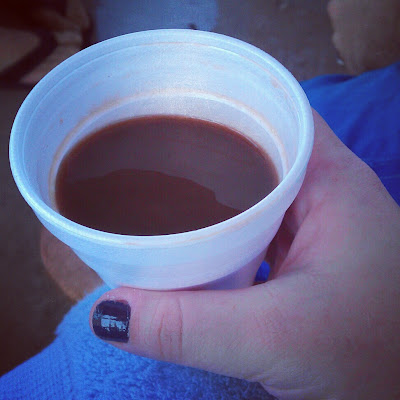 If you're ever in the area and you want to snorkel with the manatees, I'd highly recommend this place. It's a little on the pricey side (if you bring your own equipment you'll pay much less), but its definitely a once-in-a-lifetime experience.

Anyone else out there ever swam with the manatees? Or maybe dolphins? That's another thing on my bucket list... I've pet dolphins and fed them fish, but never swam with them. How cool would that be?!

P.S. While we were out in Crystal River, we dropped off the geocoin we found on our first geocaching adventure. So far, it doesn't appear as though anyone else has found it yet. But we keep checking in on it to see where it travels next!

Posted by Hannah at 7:24 PM No comments: