One of my colleagues volunteers at a local state park and loves to email us about the upcoming events being held there. Occasionally, if its an event being held on the weekends, I'll print out the flyer and post it on my message board for students to see.

This time, one of the flyers caught the eye of my janitor. The battlefield was hosting a geocaching class. Her and her husband had recently purchased a handheld GPS device and was trying to figure out geocaching on their own, but with no luck. She said she was going to go and wondered if I was going since it was up on my door. I told her I was thinking about going, but wasn't sure if my husband was going to be up for it (boy, if I knew then what I know now.... that's the understatement of the century!). So I asked Dan about it, and he said sure. Didn't seemed enthused, but willing to go and get out of the house and explore somewhere new.


So Saturday morning, we woke up and made a quick breakfast before hitting the road and heading to the battlefield. We got there just as the class was starting. Luckily my coworker and her husband had saved us seats next to them. The gentleman leading the class was a park volunteer as well as a Boy Scout leader. He seemed really knowledgeable and walked us through pretty much every aspect of geocaching. After the lesson, he broke us up into groups and told us to find the temporary caches he had placed around the park.

At this point I should probably stop and explain what geocaching is. There is a great, short video about geocaching here that you can check out. But the basic concept is this: People hide treasures, or caches,  in random places. They then go online and leave latitude and longitude coordinates for the cache for others to go and find it. The caches are usually camouflaged, so they can be difficult to find. Once you find the cache, you open it up and sign the log. If there is "swag" inside, you can take it as long as you replace it with something of equal or lesser value. That's the basic gist.

Our instructor paired us up with an experienced geocacher who allowed us to use his GPS device to find the temporary caches around the park. 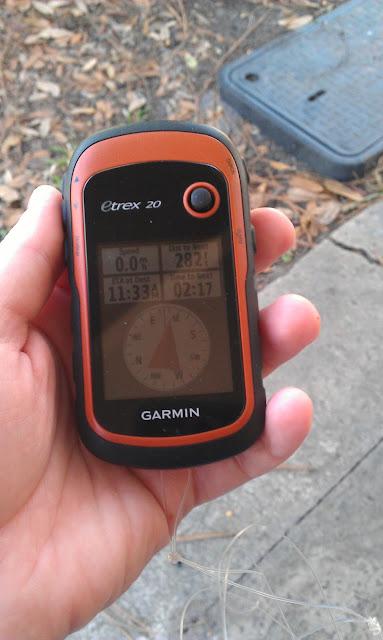 Ignore the fishing line. The guy who this belongs to says he's typically on boats, so this was the easy "lanyard" he created.

Dan and my coworker's husband led the way towards the first cache. 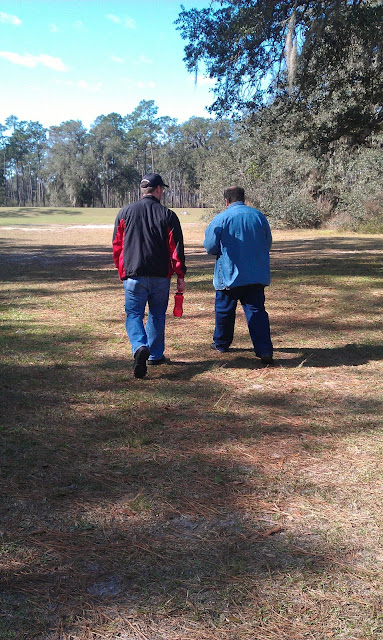 I ended up being the first one to spot the cache. We were approaching a large field and the only thing in the middle of it was a stone marker (you can see it in the distance in the photo above). I stopped to read the marker and snap a picture, and then I spotted it. 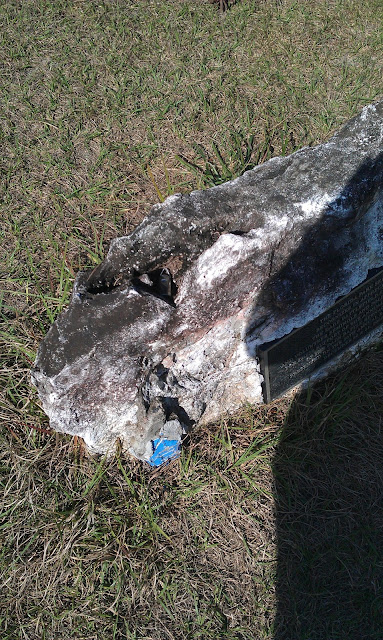 See it? It's one of those metal pill containers that you can hook onto your key chain. How about a better angle? 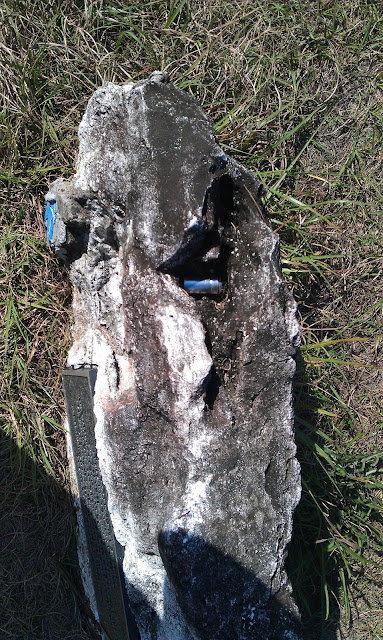 Yep, caches can be small. The instructor told us that there are caches out there that are even smaller than that! The traditional caches were old ammo containers. But now they can be pretty much anything, as long as they have a seal on them to keep them waterproof.

After the first cache, we passed the GPS around so that each of us newbies could have a shot at leading us to the next treasure. There were a total of 4 hidden around the park that the instructor had set up that morning. 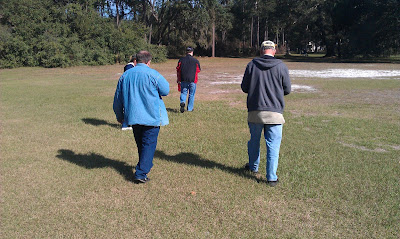 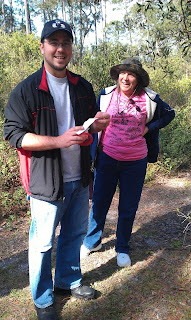 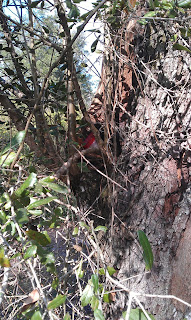 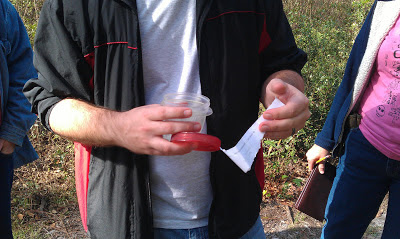 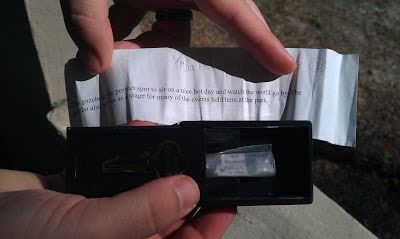 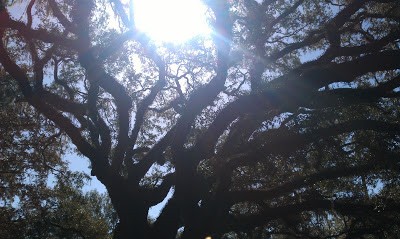 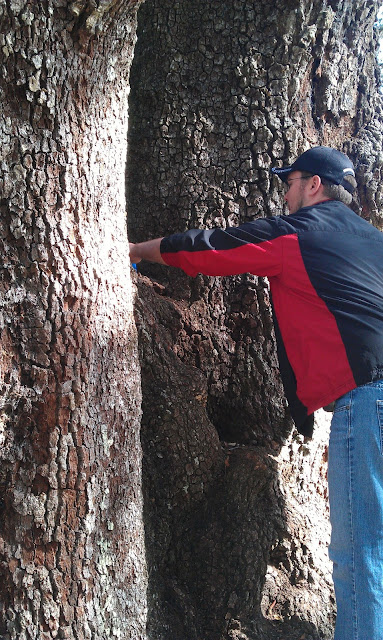 There are 3 permanent caches hidden around the park. But the expert in our group had to get going, so we didn't have a GPS unit to go searching for those.

After the class, Dan and I headed out to Walmart to do some grocery shopping. Randomly, we decided to check the geocaching website to see if there were any caches nearby. Surprisingly  there were 3 caches in the parking lot alone! The only problem is that there were too many people around to really hunt them down, so we decided we'd come back later when it wasn't so busy.

Dan seemed a little disappointed that we weren't able to find a cache on our own. So, on our way to our friends' house later that night for dinner, we stopped near their neighborhood to search for one. And voila! Dan found his first cache! 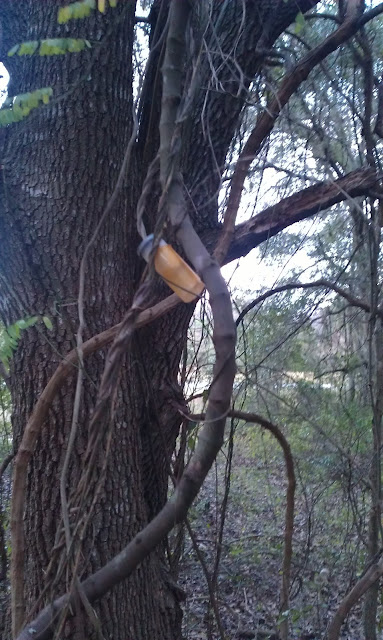 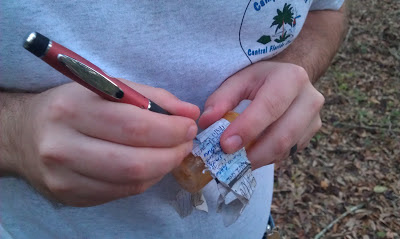 After dinner and a late night of Apple to Apples, we started to head home. About 5 minutes away from the apartment complex I asked Dan if he was awake. Obviously he was awake because he was driving, but I wanted to know how awake he was. He asked why. I thought it was the perfect time to go back to Walmart & search for that cache we couldn't find earlier.

2 a.m. and we're walking around a set of bushes looking for a hidden cache. Yeah, not creepy at all. Luckily, this store seemed to not have security driving around. Small town. Most people are sleeping at that time of night. Anyways, we found it! 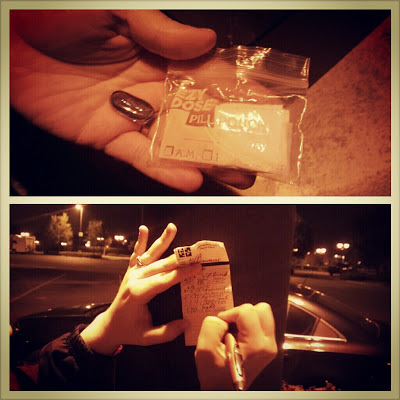 This one had a trinket in it, but since we didn't have anything to swap it out with, we left it there for the next people to find. We tried looking for one more in the parking lot, but it was too dark to see anything very well, so we moved on and went home.

Sunday we woke up and did some chores around the house. About 1 o'clock, we were getting into that lazy mode - you know the one where you don't want to do anything but veg on the couch in front of the t.v.? Yeah, that one. Anyways, Dan looks at me with his innocent little kid face and asks if I want to go out and hunt for a few more caches. I said sure.

He grabbed his car GPS (which I found out later had been downloaded with all the nearby cache coordinates - like I said before, him not being interested = understatement of the century) and we headed out. The car GPS could only get us so close. What we really needed was one of those handheld devices.

We weren't able to find the one that was suppose to be hiding under this bridge. Even with Dan getting down and dirty to try and locate it. 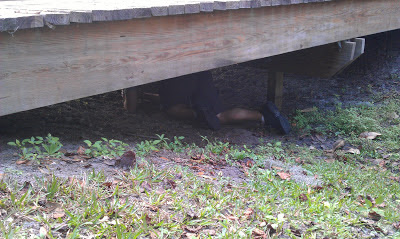 But we did managed to find another 3 caches before the sun started setting. 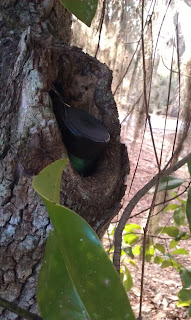 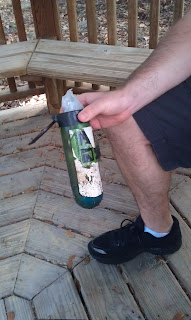 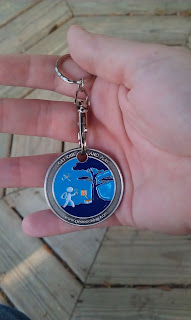 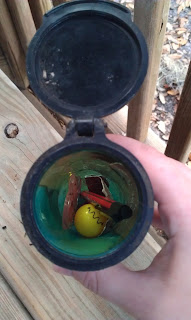 The last one we found had a geocoin in it, which we thought was pretty cool. The person who originally placed this coin is hoping that it will travel to Germany and back. We're hoping to find another cache to leave it in when we make a trip to Ocala next weekend.

We're both loving this new hobby. It gets us outdoors, introduces us to new places, and it's not overly physical (which is more for my benefit that Dan's). We've already decided that the only time we're allowed to go out hunting for caches is when we're both together. But I'll be honest, yesterday was a little frustrating not having a GPS to work with. It was hard not knowing how close or far away you were from the targeted coordinates. But, we did download a new app which has a built in compass, so we're hoping this will work much better on our next trip.

We've even started looking at caches that are hidden down in Key West - we're planning a vacation there in the Fall to celebrate becoming debt free (fingers crossed!). Geocaching seems like an amazing, and cheap way to explore new areas. And we're both excited to see where it takes us!
Posted by Hannah at 2:43 PM